I visited my hometown of Portland, MI and created this small town America morning show parody. Check it out and see my horrified family as I ambush them into starring in my crazy creation!

Katie-Do season 2 has begun! The online variety show will be releasing bi-weekly and featuring sketches, songs, and inspirational motivation. Subscribe so you don’t miss out!

This week, Katie-Do is in the Halloween spirit with a horror/comedy piece. Watch it alone… in the dark… I dare you!

If it made you jump, hold your breath or laugh, please share it with your friends! See you next week! Mwa-ha-ha-ha!

It’s episodic season and auditions are picking up!

Meanwhile, I’m finishing up shooting Katie-Do Season 2 and was interviewed for an inspirational blog, called “My Dreams Matter”. Sometimes it’s hard to stay inspired as a freelance creative. Check out the blog to see some of the ways I keep smiling while fighting the good fight! I’ve just wrapped up pre-production and started filming the very first couple episodes of Katie-Do Season 2. It’s a slightly bigger undertaking this season with more sketches and locations but the same playful, inspirational Katie-Do vibe. Catch up on Season 1 while you wait! New episodes coming this fall.

So, how do you like the website redesign? I’m very excited and thankful to ShooFly Design for building it and to Jenn Spain Photography for taking the majority of the featured photographs.

It’s been a busy few weeks! I wrapped up the advanced sight-singing class at SAG-AFTRA. I will be back to repeat it in the future though, probably ad nauseum, because sight-singing is a skill that needs constant attention.

At the end of May, I represented the self-producing set at the Produced-By conference, put on at the Paramount lot by The Producers Guild of America. It’s the second year I’ve attended and once again, it was completely inspiring.

In acting news, I took a little break from comedy to star in the dramatic short film, The Homestead. We have one day left of shooting and I’m looking forward to seeing the finished project!

I’m enjoying the June gloom here in LA and soaking it up before the summer heat and sun chase me indoors. I know, I know! But have you seen me? I’m too pale for the beach!

April has been my “Work hard, play hard” month. I did a deep dive on the sitcom pilot I’m writing, had a couple of photo shoots, and worked on an independent pilot with Zing Factory. On this project I acted as a producer, second director, actor, and as you can see, even sound operator! 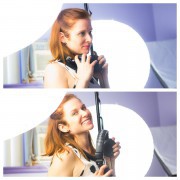 In the middle of all that hard (but fun!) work, I took a break to play hard in Kauai! It was dreamy. Breaks are important to renew the muse and I’ve returned refreshed and inspired! Happy Spring!

On March 18th, come join me and the Zing Factory team for Web Series Unplugged. They’ll be screening 2 episodes of Speed Therapy on the big screen!

Here are the details:

Katie-Do, my self-produced variety show on YouTube is still going strong. I’ve wanted forever to create a video where I harmonize with myself and the holidays were the perfect excuse! Check out my rendition of “What are You Doing New Year’s Eve” by Frank Loesser in four part harmony! Happy New Year!

It’s a vlog. It’s an interview show! It’s a comedy, variety, inspirational, whatever I’m feeling that week show on YouTube and I’m very excited to share it! Please check out my new solo project Katie-Do. I’m looking for some audience interaction so please leave comments and subscribe. So excited to share this journey with you!

Pilots are the theme of this month. I directed and had a small role in Zing Factory’s pilot, “Hit Refresh”. We had an excellent cast, I absolutely loved directing, and now it’s off to the post production team. I can’t wait to see how it turns out!

I was also cast in an independent pilot called “Good News Gone Bad”, produced by We Make Movies, an LA film collective. We shot at YouTube Studios here in LA. It was my first time in that amazing space and with the talented cast and crew steering the ship, it was a great experience. Follow me on my facebook fanpage for a look at some of the insane setups and getups they had me in! 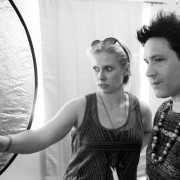