Kate Bergeron grew up in Portland. No, not Oregon. No, not Maine. Portland, Michigan. Yes, that’s a thing. And it had (has!) an amazing summer theater program which Kate acted in until she aged out of it. Then she started directing.

After high school, she grew tired of explaining that Michigan also has a Portland and moved to Chicago — yes, THE Chicago — to study musical theater and performance art at the Chicago College of Performing Arts (yes, that’s a thing), comedy at Second City, and commercials, independent film, and rock music at “Real Life Chicago, Inc.” (Not a thing.)

After college, Kate decided to become a cliché by falling in love with the drummer in her rock band. She dragged him to LA where she’s been making funny for money ever since. Also, they just made a baby. Kate’s very into making things.

Kate is a dreamer. A dreamer with balls. Big, metaphorical balls. 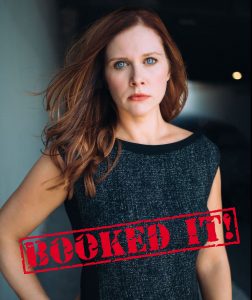 I’m so looking forward to being on set later this week in the short film, Pointing Fingers. It’s a dramatic morality tale about grey areas and tough circumstances. I play a supernatural professional, whose job just happens to be judging and ushering people into the afterlife. No pressure there, right!? LOL. Follow me on Instagram and check out my stories to peek behind the scenes!

The way to my heart? Give me something cozy. Than

YOU are doing a freaking amazing job. Your hair is

Sometimes 1 kid - when they talk as much as mine d

Cheeeeeeese! It's #NationalCheeseLoversDay and gir

"Waking up when you are a parent is like being sho

#TBT Throwing it alllll the way back to this gem o

PSA: I missed #NationalCutYourEnergyCosts Day but